Takeaway: If more than one seem to fit you, don’t sweat it — there’s room for multiple toys in your drawer, after all.

Sex advice can sometimes be generic, but who we are in the bedroom is extremely individual. There are as many sexual personalities as there are people — but according to sex therapist Vanessa Marin, people can actually be grouped into 11 sexual personality types.

It can be useful to know what type you are so that you know the best ways to improve your sex life, including the ideal toys to buy. Here are the 11 types and a product that fits each one.

Read more of our sponsored article on Kinkly

If there’s a recent trend that’s really taken off in sex toys over the past few years, it’s suction. And it’s no surprise. If you have a clitoris and have been on the receiving end of clitoral suction, whether from a toy or an obliging partner, you understand the powerful orgasms this sensation can deliver.

Suction helps draw blood into the clitoris while gently stimulating it, often without vibration – or even touching it at all! It can also stimulate deep into the clitoral complex which, for some people, delivers the most powerful orgasms they’ve ever experienced.

Plus, for those who are sensitive to vibrations, the sensation of suction can be a welcome change, one that often leaves your body begging for more, more, more.

Looking to give a suction-based sex toy a try? Here are seven that’ll have you celebrating the clitoris!

See the entire article and the rest of the list on Kinkly.com

See the entire article on Kinkly.com

Takeaway: Nipplegasms aren’t common, but even if you don’t make it all the way to O-town, playing with them can still be a lot of fun.

I’m sure you’ve heard of the elusive nipplegasm: the idea that a person can orgasm just from stimulation of the nipples. Not limited to a single gender, nipplegasms can be experienced by anyone with sensitive nipple tissue. Nipplegasms aren’t common, but even if you don’t make it all the way to O-town, playing with them can still be a lot of fun.

Some people find that nipple stimulation with the hands is enough stimulation for orgasm. If that’s you, that’s great! However, you wouldn’t be here if the idea of nipple toys didn’t appeal to you. Even if you’ve been unable to experience a nipplegasm before, you might want to see if sex toys can help make the experience hotter. Not only can some of these toys increase the sensitivity of the nipples, but they can provide hands-free stimulation of the nipples while you choose to focus on other areas. Here are some tips on how to zero-in on that elusive nipple orgasm.

Suction feels fabulous on other sensitive areas, so why not try the nipples? Nipple pumps are pumping toys that can be used to create this sensation. With a hollow chamber pressed firmly onto the nipples, the suction pump is used to remove air from the chamber – which provides suction onto the nipples and helps engorge the nipple with blood. Much like the penis, a fully erect and fully engorged nipple tends to be more sensitive to any type of stimulation you want to give it. 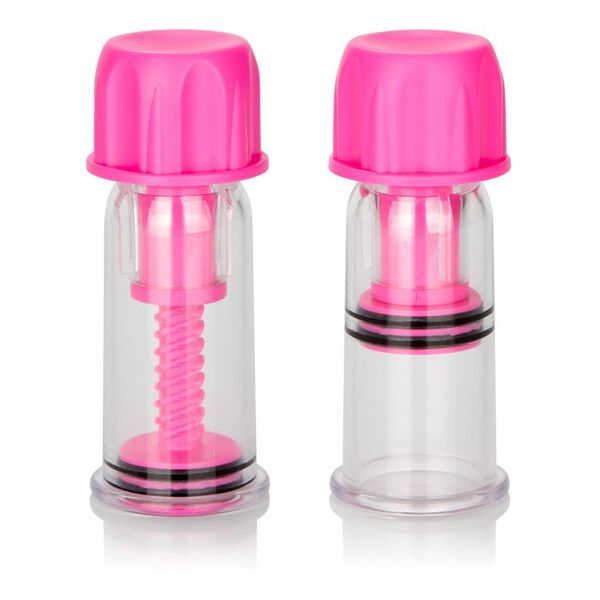 These vacuum nipple suckers are simple, inexpensive and can be sensational fun. Get them at Indigo Honey.

Read the rest of 5 Tips for Finding That Elusive ‘Nipplegasm’ at Kinkly.com

This list includes G-spot toys and external toys, all petite enough to fit inside my case meant for big sunglasses. The case physically protects them, conceals them, and makes them relatively uninteresting to people snooping. Plus, it’s easy to bury in the rest of my stuff.

External clitoral bullet vibrators are especially easy-to-hide because they’re so tiny. That doesn’t mean you have to sacrifice power, though. The Blush Novelties Exposed Nocturnal bullet is 0.9″ wide and 4″ long, but it’s powerful enough for me to use through underwear and a pantiliner. It’s not the rumbliest or most quiet bullet, but it does offer near-Hitachi-level power in a small, pinpoint package. And it’s waterproof, so I can use it in the shower to drown out the loud vibrations.

As a toy that basically consists of a strand of anal-safe beads, you can insert the beads, one by one, to experience that sensation over and over again. You also get to experience it on the way out!

Takeaway: Taking care of your pelvic floor could lead to the best orgasms of your life.

You’ve probably heard this term and it certainly doesn’t sound sexy. However, this area of your body is key to sexual health, sexual performance and your enjoyment of sex.

Now I’ve got your attention, right? Here we’ll take a look at the pelvic floor, how it works and what you can do to keep yours as healthy – and orgasmic – as possible.

Want to know what’s hot and happening in the “personal massager” realm? Cosmo knows what’s up!

This recharageable toy is meant to fit perfectly in your hand and is cute AF too. The tip is meant to create suction over your clitoris while the simulteneous vibration and suction takes you over the edge. It can hold up to an hour of charge, and comes with a special waterproof top sleeve that makes cleaning a breeze.

This article was originally posted on Cosmopolitan

You read that right.

This may come as a surprise to both sexes, but compared to guys, women tend to win the orgasm lottery. At least that’s the finding of a study conducted by Concordia research and published last month in the lyrically named Socioaffective Neuroscience & Psychology journal.

Concordia’s findings were that variety is the spice of a woman’s bedroom life. Unlike men, who are limited to the same old, same old when it comes to the big O, women have remarkable opportunities to get all shivery and shaky from a number of sources.

The study’s authors looked at vaginal and clitoral orgasms. Whether one or the other is real has been debated by sex researchers for years. According to the release that broke down the study results, researchers arrived “at a new understanding of the female orgasm that incorporates the external clitoral glans, the internal region around the G-spot, the cervix and sensory stimulation of non-genital areas such as the nipples.”

Senior study author Jim Pfaus was quoted as saying that through “experience, stimulation of one or all of these triggering zones are integrated into a ‘whole’ set of sensory inputs, movements, body positions, arousals and cues related to context.”

Even more interesting, Pfaus and his co-authors concluded that the elements that mix to make that magic moment can change over time “as women experience different kinds of orgasms from different types of sensations in different contexts and with different partners.”

Pfaus emphasized that their findings underscored that the assumption a woman’s orgasm is some variation on the male version is dead wrong. “Unlike men,” said Pfaus, “women can have a remarkable variety of orgasmic experiences, which evolve” over time. The landmarks on a map of sweet spots all across a woman’s body “is not etched in stone,” Pfaus said, “but rather is an ongoing process” and determined through experimentation and discovery.

Women Enjoy Sex More Than Men Do was originally published on Maxim.

Looking to get your groove on? Take 10% off your entire purchase at IndigoHoney.com by using code IHBLOG10 at checkout.

@thompsonlxs_We have all heard it many times that happiness is an inside job, and as with any job, succeeding takes dedication, consistency and hard work. Today, I am sharing five unexpected ways happy, healthy women live their fullest and most productive lives. 1. She Has Relationship Check-Up’s. There is a saying that suggests that we…